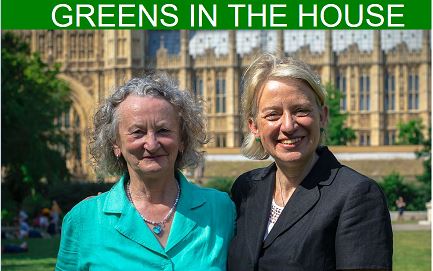 Fourteen Lords' amendments to the Environment Bill will be debated by the House of Commons at the end of October and we need your help to lobby MPs, so they pass the ones listed below.

Our Green Party peers - Jenny Jones and Natalie Bennett - have been working hard to get these changes through. An amendment on soil health passed because of Natalie's single-handed determination to change the discussion on the use of artificial fertilisers and chemicals in farming. While Jenny's constant focus on air pollution ensured that an amendment setting a target for fine particulates (PM 2.5) was successful.

You can support Natalie's and Jenny's work by finding and messaging your MP using They Work For You. This newsletter sets out the amendments, what they would change and why those changes are important.

These amendments to the Environment Bill on climate change, biodiversity, plastics and sewage will only protect human health and the natural world if they are enforceable and that is why two of the amendments are especially important. The Lords want to strengthen the Office for Environmental Protection (OEP), so it has independence of funding and appointments, along with the ability to take court action against the government and other public bodies when they get things wrong. These key amendments will stop the government directing the OEP's work or hiding reports.

The government has already written several of its own amendments into the legislation in response to the concerns raised by both peers and MPs. These changes help, but still fall well short of the protections our environment needs. We are asking you to lobby your MPs to improve the Environment Bill and give Caroline Lucas MP your help in convincing the Commons to back these crucial changes.

You can see more on this here.