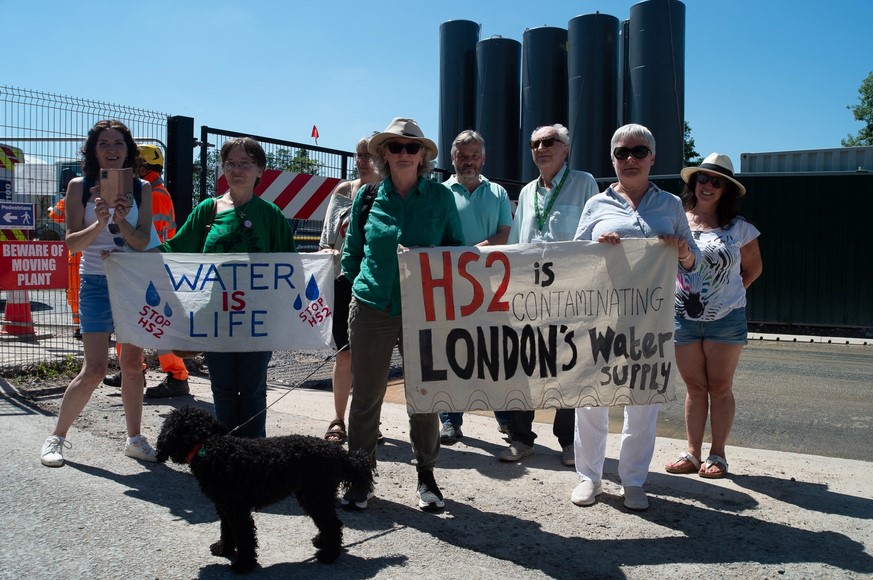 See here for a link to Green peer Jenny Jones blog on her recent visit to HS2 campaigners in Hillingdon.

Green Party peer, Jenny Jones, met campaigners on the outskirts of London last week to see for herself how the building of HS2 is threatening a large proportion of London’s water supply and impacting on local environments.

The initial concern of the campaigners was that the HS2 building works will spread an existing pollution spill across a larger area of one of the main aquifers supplying water to London. One pumping station at Ickenham closed years ago due to leakage from the New Years Green land waste site and the Blackford pumping station has been closed as a precautionary measure while the HS2 work is taking place. In order to replace half of the 20m litres a day of water lost from Blackford, two new replacement pipes have been constructed from other pumping stations. All this extra expense is a reminder that the campaigner’s fears over public safety are real.

First, the short term impacts of the water being carried via the Maple Cross sewage system, which is one of the many in England that fails on a regular basis. Maple Cross discharges untreated sewage into the River Colne upstream of the pumping stations at West Hyde and Northmoor, where two new purification processing plants have been constructed to try to deal with the problem.

Second, the longer term problems of pollutants trapped in the chalk matrix causing permanent damage to an area that supplies nearly a quarter of London water.

Jenny has asked questions in the Lords about the cost of all this and how long they expect the damage to continue.