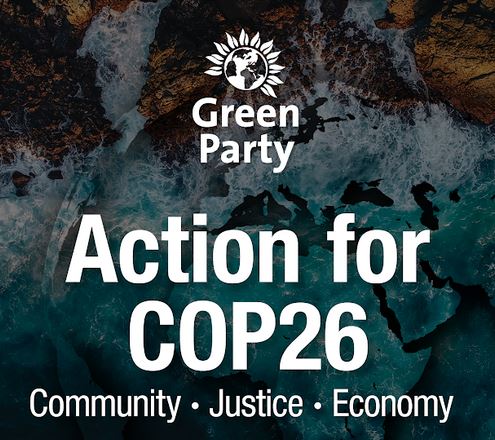 This year, the United Nations Climate Change Conference, known as COP26, is being hosted by the UK in Glasgow from 31 October to 12 November 2021. The Prime Minister’s recently announced 10-point plan only takes the UK just over half-way to meeting its interim climate targets, while government support for new roads, airport expansion and fossil fuel infrastructure undermines progress. The Green party proposes a joined up realistic framework, action today not promises about tomorrow. Nationwide Green councillors and local Green parties are working with local communities to stop new roads, airports and developments that damage nature and climate and push for positive change in areas such as housing, domestic heating and public transport.

The Green party's 10 point plan is below:

1. Carbon tax - A carbon tax of £100 per tonne of carbon dioxide rising to £500 by 2030, applied to all emissions, with some of the tax yield used to compensate those on lower incomes.
2. Develop renewables - Develop offshore and onshore wind to provide at least 100 GW of electricity by 2030. This should provide around 70% of the UK’s electricity demand by this time.
3. Improve Homes - Government investment to improve the insulation of every home that needs it and provide heating upgrades and the highest standard of energy efficiency for one million homes a year.
4. A sustainable transport revolution - Cancel the hugely carbon intensive road-building programme, take all fossil fuel cars off the road by 2030 and invest in public transport.
5. Reduce emissions from aviation - Stop all airport expansion, apply carbon tax to aviation fuel and introduce a Frequent Flyer Levy as part of a drive to reduce air miles by 70% by 2030.
6. Electrify industry - Provide grants to support industrial conversion replacing old high-emitting carbon equipment with newly developed low carbon equipment.
7. Restore Nature - Increase land for forests and woodlands by planting 700 million trees by 2030 and encourage the restoration of peatland through new subsidies to capture carbon and protect nature.
8. Sustainable Agriculture - Provide farmers with subsidies to help transition to sustainable forms of land use, including organic farming, agroforestry and mixed farming and away from livestock farming.
9. Heathier food - Encourage a healthier diet and reduce consumption of meat and dairy in the UK.
10. Universal Support - Introduce a Universal Basic Income, paid to all residents to tackle poverty and provide a financial safety net to everyone during the transition.